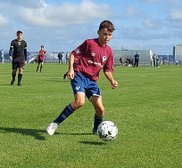 Pre-Season Fixtures For The Young Wingmakers

Our Under 8’s were in action at home to Vauxhall Motors FC and Cammell Laird FC who stepped in last minute to cover a cancellation. Our two Airbus teams were only formed a month ago but they are all gaining a great understanding of playing with each other. They are starting to recognise the way in which the coaches are encouraging them to play - which is confidently and positively.

Up first for the wingmakers was Vauxhall Motors. It was a slow start to the game for us, but we soon found our touch and we started to move the ball around the pitch well against well drilled opposition who boast a lot of talent. There were some great goals scored by both teams during the game.

We then came up against Cammell Laird FC, who are a very physical and technical side, but the airbus players dealt with the challenge well and listened proactively to the guidance throughout the game in a close encounter.

Fantastic team performance from our Airbus u9s away at a wet Bala on Saturday morning. The excellent passing combinations & movement of the Young Wingmakers, within limited pitch space - provided us with many goal scoring opportunities with quality finishing on show.

This was followed up with excellent performance away at AFC Telford on the following day. Great football played throughout & great praise for our young wingmakers from opposition Coaches

The U10’s travelled to Bala this weekend. A really positive performance from the lads, scoring plenty of brilliant goals and playing some really good football. We’ve been working on passing combination during the week at training and it’s encouraging to see them implementing that in the game. We really struggled to pick a man of the match as all players did their job superbly well. An all round brilliant team performance, well done to all involved.

Pre-season fixtures are continuing for our U13 side as we welcomed our close neighbours Broughton Utd U14 to the Hollingsworth Group Stadium.

The lads scored 2 goals in the 1st half as Nataniel Rakowiecki bagged a brace...one an excellent header from a fine cross from Jack Davies, the 2nd a rocket with his left foot into the top corner from the edge of the area. Chances were plentiful and on another day we could have been further in front.

The 2nd half enabled us to express ourselves and practise the objectives detailed during training over the past week. After creating numerous chances, but unfortunately converting, we finally added to our total when Alex Mossman scored late on.

A good run out with valuable minutes in legs. Well done to everyone involved.

The u14s continued their preseason with a busy weekend playing 2 games in two days. They first travelled to Holywell on Saturday. The wingmakers got off to a sloppy start conceding a very early goal. Once they settled they started to move the ball really well and found plenty of spaces inside the opposition half but couldn’t quite find the killer pass or finish against a well organised Holywell defence. Second half started the same as the first with Airbus conceding an early goal. Again they settled following the goal and controlled the possession and the game was mostly played in the Holywell half. The wingmakers found their goal and created some chances but couldn’t quite find the net for their second. A positive display from this newly formed squad.

The second game of their weekend came against Rhydymwyn at the Airfield. The boys started really well and got in their stride early moving the ball forward quickly, at times too quickly, with the final ball being cut out or going straight through to the goalkeeper who was very busy and well up to the task in the first half. The wingmakers found the breakthrough, followed by another before half time to command the first half. Second half started similar with the Blues keeping the ball and moving the Rhydymwyn side creating spaces all over the field. The second half resulted in another 4 goals being scored by the wingmakers in what was a very good display by the boys.

A game of two halves for the 15s against a physical Curzon Ashton side. The first half was a close affair with airbus having the better of the game, but Curzon were 1 up at the break. Second half saw a number of changes and trialists feature, in a half which was much more open than the first. A couple of Airbus mistakes and a number of good saves from the Curzon Ashton goalkeeper were the difference in the second half. Goals came from Warren Leech from the penalty spot, and 2 from Kenzie Pickles.